So today I decided to spend some time writing about the event that made the whole topfreedom movement legal in the state of New York.

In 1986 a group of seven women went for a picnic in Cobbs Hill Park in Rochester, during which they removed their shirts and allowed their breasts to be exposed. They were subsequently arrested and found guilty of the NYS exposure laws. It wasn't until six years later in 1992 that the case was finally overturned by a higher court. Some of the legal decision associated with this case can be found at http://www.tera.ca/legal.html#Rochester

The following photo is not from Rochester, but makes me think of how natural a topfreedom picnic can be. 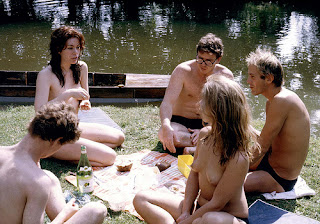 Photo Courtesy of derable
This makes me wonder. Since this was a court's interpretation of a law and and not the explicit decision of the Legislature or a vote of the general population, does this decision truly represent the opinions of the population as a whole? It has been 19 years since the court decision. I don't know about you, but I don't frequently see women exercising their topfreedom rights. I don't see it in people's own yards, let alone going down Main Street or at public beaches. When was the last time you saw a woman exercising her topfreedom right while walking around Niagara Falls State Park the green space surrounding the State Capitol? How often do women have a picnic at their local park or community pool, not even knowing that it is legal for them to take their top off if they choose. 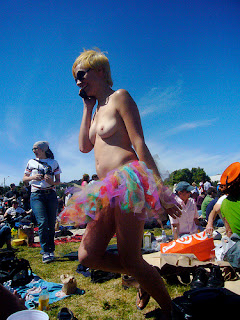 Photo courtesy of dlytle
To me it seems like there are two factors at play here:
1. Public education - I'm guessing that a majority of the state population doesn't even realize that it's legal for a woman to remove their top in public and expose their breasts. I've known people that didn't think that breastfeeding in public was legal, let alone fulling exposing both breasts. The other aspect of the public education is to ask how many law enforcement officers and judicial staff know about the current interpretation of the law. How much misinformation is given out by local officials because they have the wrong interpretation of the law.
2. Exercising our right - How many of us that have a complete understanding of the law would actually go out in public and exercise these rights? Few people want to be the only one doing something that may be interpreted as wrong. Just because it's legal doesn't mean it's right to do it. Once the public as a whole in educated, it's a matter of getting women to regularly exercise our rights. I'm not saying that we should go out in the middle of winter when there's five feet of snow on the group, but we should seriously consider it when it's 80 degrees out and sunny. Go out and enjoy a stroll in the park, go to the local beach, or go the the local ice cream stand. 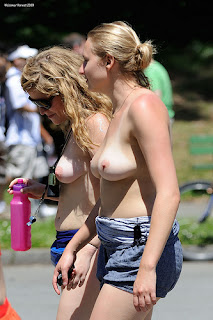 Photo Courtesy of naturalturn
Posted by Topfreedom New York at 3:53 PM No comments: